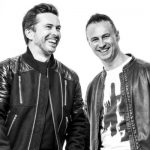 Setting standards in the industry ever since they first collaborated in 2005, Matrix & Futurebound aka Brendan Collins and Jamie Quinn possess one of the most impressive track records in Drum and Bass history. The duo can boast over 30 Million combined Spotify Streams, one critically acclaimed album, ‘Universal Truth’, and multiple consecutive Top 40 UK tracks & Radio 1 Playlisted records with a back catalogue including hits such as ‘All I Know’, ‘Magnetic Eyes’, ‘Don’t Look Back’ and the legendary Silver certified ‘Control’ – which reached #7 on the UK’s Top 40 singles chart.

For 2018 Matrix & Futurebound are proud to announce their highly awaited second artist album and follow-up to 2007’s classic LP, ‘Universal Truth’. The new album, entitled, ‘Mystery Machine’ will be released autumn this year and is sure to encompass big singles & the massive crossover moments M&F are known for, along with heavy hitters & pure DNB that firmly positions them as pioneers in their scene.

The last 12 months have seen Matrix & Futurebound rolling off 4 singles, including the anthemic, ‘Light Us Up’ featuring Calum Scott (which has clocked up over 6 Million streams), the otherworldly, ‘Human’, featuring rising young singer, Raphaella, Donald Trump (not) endorsed ‘The Wall’, and first track from their forthcoming album, ‘Mystery Machine’. A specialist radio favourite, the track picked up 7 plays from Rene La Vice on Radio 1 alone.

As two of drum and bass’ brightest stars, Matrix & Futurebound have remixed the likes of Emeli Sande, Tine Tempah, Jess Glynne, Eric Prydz, Birdy & more. Their remix for Emeli Sande was one of the vocal Drum & Bass anthems of the year gaining huge support from daytime Radio 1 making its way onto the A list and with extensive specialist play from Annie Mac. This culminated in a highly successful Live Lounge appearance where the duo performed ‘Breathing Underwater’ live with Emeli at Maida Vale and their remix closing out the London ’17 NYE fireworks. High in demand, they have recently added their magic touch to Paloma Faith, Demi Lovato and Pendulum for their much acclaimed forthcoming remix of ‘Watercolour’ will be released as part of the band’s huge Reworks campaign this summer.